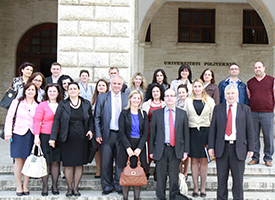 •HERE’s national seminar on “Strengthening links between universities and businesses, at Durresi University, on 17 May 2013

•Open Lecture for EU Programs at “Luarasi University”, on 9 March 2012

•HERE’s seminar on “Reform of teaching profession” at Shkodra University, on 29 June 2012

•Monitoring Visit for University “Aleksander Xhuvani” in Elbasan, on 7 June 2012

•HERE’s Seminar on ““Ethics issues in academic and research activities”  in Tirana University of Arts , on 14 December 2012

• Info Day in Korca University and HERE’s Seminar on “The reform of the second cycle programmes” in the University of Korça , on 21 June 2011

•Info Day in Elbasan University and HERE  seminar on “Experiences on Doctoral Studies” in the University of Elbasan, on 27-28 October 2011

"This website reflects the views only of the authors, and the European Education and Culture Executive Agency and the European Commission cannot be held responsible for any use which may be made of the information contained therein."